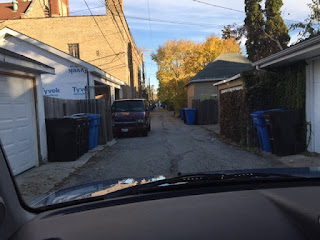 This neighbor is not exactly endearing himself to the tenants of our block.  he spent last summer
building his garage in his spare time.  He worked on it here and there in the evenings presumably when he got home from his paying day job.  Which means instead of everyone suffering through the noise of pounding hammers and blocked alleyways for a short, consecutive set of days he spread the annoyance throughout the summer.  There is nothing like trying to enjoy a glass of wine on your deck while someone pounds a hammer 100 yards away.

i cannot fathom why he needs to place his van in this position.  Technically he's not blocking the alley but it does require a little careful manevering if you have a larger vehicle.  I suppose he could be loading and unloading or even by having the van act as a door it makes it harder from someone to snatch and grab.  He's only 50 yards away from the cross street which has plenty of parking so why not put the van there while working on the garage?

I think I'm only bitching because many a time last summer his van was out much further and did block the alley.  And also the noise pollution.
Posted by Icarus at 10:05 AM