Next time skip the bread

She was supposed to put a casserole in the oven at 430 so that it would be ready when Nightingale brought the kids home from daycare.  She even texted us to ask because we had forgotten.  But instead of putting the casserole in the oven she went to Jewel to get some bread.  Since she was leaving the house she was afraid to leave the oven on, which  I can appreciate even though you can set the timer so it turns off once the cooking is complete.

So because dinner wasn't ready when Nightingale got home, she had to feed moose and squirrel something else.  We aren't positive but ti seems that the smoothies she made caused Boris immediately, and Natasha after bedtime to throw up.

We stripped Natasha out of her pajamas and brought her into bed with us.  Boris was able to go back to sleep or stay asleep through this.  I put the bedding, the pillow and the stuffed bear into the washing machine and ran it, hoping I'd get to dry it in the morning before daycare.  Luckily Natasha kicks a bit so i was up at 3:30-4 and decided to be useful and put the wash into the dryer.

Here's the thing.  she didn't need to get the bread.  and in her mind, she thinks she's just going across the street to the store, like at her home.  Not realizing how far a walk Jewel is from our house and not anticipating long check out lines.

It's been this way my entire life.  I was telling Nightingale about the time my friends and I were getting our library cards.  All we needed was a utility bill to prove we lived where we said we did.
She could have just given me the phone bill but instead went to the library and showed them her driver's license. 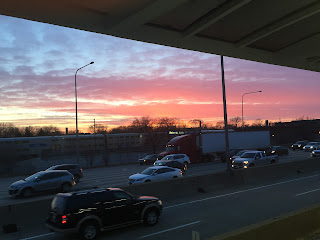 My mom has a child-like understanding of the world and most of her problems could be avoided if she would just be more of an adult.  Unfortunately this isn't part of her programming and she has gotten away with being herself for the better part of 7 decades.

I have to think about what project around the house to work on this year.  There's a lot of things I'd like to do but I'm not sure what to focus on.  I'd like to make the laundry room more functional and we need new washer and dryer.  I also want to epoxy my garage floor.  I'm trying to do something about the space under the deck and the deck itself needs some repairs.  The front porch also needs work.  Finally it would be a good time to update the electrical and deal with the power line that connects to the home.  The thing is, that might be the budget breaker that puts other things on hold.