I finished the spindles yesterday.  I almost didn't, thinking today would be better because of cooler weather but given the rainfall on this First Day of Summer, I'm glad I did.  Now I just have to tackle the risers which shouldn't be hard at all and then do some touch up.  Followed by some cleanup.  I still need to get some quarter rounds but that shouldn't be a big deal.

We had our annual Neighborhood garage/yard sale last Saturday.  It was, as the kiddies say, hot AF.

As long as I can remember, it either rains or is unbearably hot or both.  The first time we went to this sale, we didn't even live here, but knew we wanted to.  The next year it we lived here and it was awesome.  But in the following years I noticed that the number of houses participating was dwidling.

This year the person who normally runs it didn't, allegedly being out of town.  someone stepped up nearly last minute so it wasn't well promoted.  We didn't get a lot of foot traffic so they people who did show up got great deals because we were in purge mode and priced things to sell.  We made about $150 but might have done better if the weather was cooler and the event better advertised.  The important this is...we got rid of some stuff. 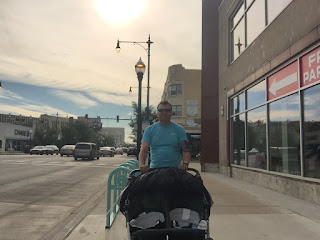 Sometimes I take the kids to daycare in their stroller, which means I return home with an empty stroller.  Inevitably someone sees me and makes a funny like "hey you forgot the kids".  It's always a chuckle but somehow after the 782nd time, that chuckle sort of loses its edge.