Two steps forward, one back, one sideways 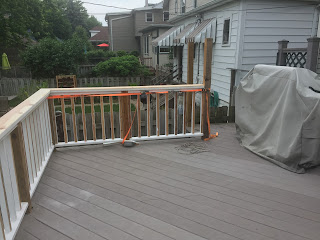 Not sure how much progress I'll be able to make on the porch this week.  It rained over the weekend
and of course with my kids around, I didn't bother even trying to paint.  Monday and Today have been wet and humid.  I'm hoping that things dry up and I can do a little bit Wed/Thurs/Friday but it is expected to be hot, and maybe humid as well.

I do have a crew working on the deck rails.  This has been a bigger project than it really should be because of two reasons.  First, it's too small for deck building companies but too large for your run of the mill handynman.  I had a few people come over in late march to give me quotes and most either low balled the project, which showed they really didn't understand what was involved or ghosted me because they realized what a clusterfuck it really is, because.....

Second, I don't really want to talk about all the issues but let's just say the deck was built wrong.  I cannot be certain, but I think they put in the swimming pool (that we had removed) and then built the deck, which made for non standard length railings.  There is one railing that is shorter than the rest because of a window.  They really should have just made the deck shorter but they wanted the extra footage. 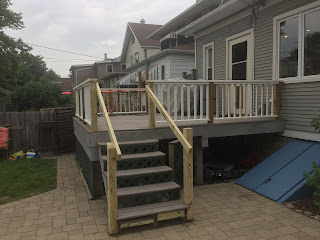 Anyway, I had one or two people give low estimates but my gut told me that either scope creep would occur and the price would go up anyway or they would take shortcuts to keep costs down and that would come back to bite me in the end.

The other thing about this, or any project really, is I don't want to learn a trade in order to get what I want.  Tradesmen aren't gonna tell you that you have option A, B and C unless you ask because Option B and C is more work for them and might cut into their bottom line.

Like when I did the electrical panel.  I really wanted to move the location but that is more work so every time I got a quote, the price got increased.  Oh it will cost X.  X is fine.  Did I say X, I meant X + Y.  That's okay.  Plus Z.

Thank you for reading and I hope you will comment below. Here's the part where I beg for stuff because we get paid in likes, shares, re-tweets and feedback. If you like my posts, funnies and random facts, please also do any and all of the following:
Follow Mysteries of Life on Twitter (@MysteriesOLife), Facebook or subscribe via email.
Posted by Icarus at 9:15 AM