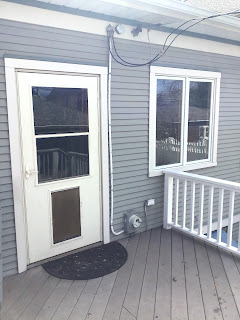 When we bought this house our inspector told us that we had a couple of problems with the electrical.  First problem was the feed was over the deck, which is absolutely against code.  Like it was never okay and there is no grandfather clause for that one.

Second, the electric panel in the basement was also not up to code.  It was using something called 'Cheaters' which allowed a 200 amp service to work with a 100 amp panel.  At least that is how it was explained to me.  It was also explained that this is fine in most parts of the country but not in Cook County.  Yay government oversight!

We asked the owner to address it and he reluctantly gave us some money to take care of it.  I was prepared to walk away because this is a legitimate get out of contract free card issue.  But the respective realtors wanted their money after spending so much effort finding us a home and marketing his, so they convinced him to give us a credit.   Of course the standard way of determining how much money is by getting three of your electrician friends to give you lowball quotes and you take the average.  You will never find an electrician who will do the work for that price.


I've been getting quotes for years from electricians who would do the panel and the move and upgrade the service (I wasn't sure if we had a 200 Amp service but it appears we do) and they all came in around $3K.

Honestly, I don't remember how much was given but now that I think about it, it might have been more generous than I remember.

I got the panel taken care of in 2017, or was it 2018, via an Angie's list deal for about $800, IIRC.  But the electrician kept upping the price to move the feed because there are only so many good spots to put it and putting it in the best exterior location might have meant moving the panel which is a lot of work. 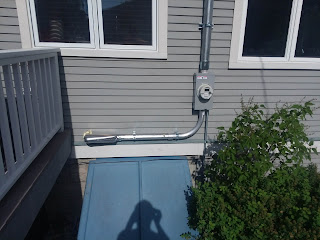 When COVID-19 derailed our plans to list the house and move south, I decided it was time to fix this issue so that I wouldn't have to give the next buyer a credit for this.  I'm likely gonna have to give them a credit for something else, because there is always something else, so this helps.  Plus Boris was walking up the stairs once with an outstretched rake in his arms and although he's too short to reach the power line now...it's only a matter of time before we have fried Moose. 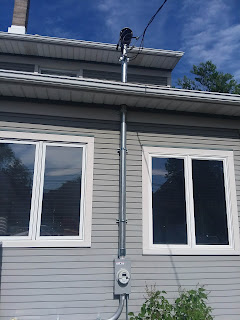 I got a couple of quotes and found someone I liked.  He figured out a way to move the line with minimal impact and without having to do some of the destructive things other electricians threatened.  He also consulted with ComEd to verify that it was up to code and best practices and we got their blessing so yay! 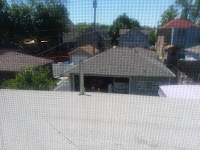 He came in April to give the estimate and I was honest and said I wanted to do this but couldn't pull the trigger at that moment because i had other projects in-flight but wanted to get this going before summer ended.  He was very accomodating and not pushy at all. 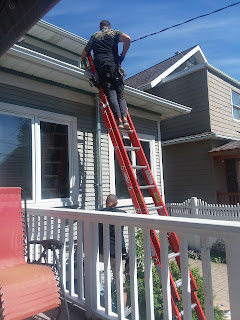 Ironically, once I was able to get to this, we had issues with weather.  May was rather rainy and we kept having to reschedule.  We pushed it out to the first Thursday in June but then Nightingale had us join the Adamas on a lakehouse vacation.  We were going to have him do the work anyway with my mom here to reach out if there  were any problems but my spidey sense said not to do that.  So I cancelled 11th hour and reschedule for the following week.  Between his schedule and the weather, we got it done on Friday, June 12th.  It was a good thing I rescheduled too because there was a slight misunderstanding in where they would put the new feed and by being there, they were able to rethink it on the fly.

It cost $2500 and I do like how it came out.  I'm worried that if we stay here, we'll someday put an addition on the house and that will mean this was for naught but what can you do.