Away on Planet Michigan 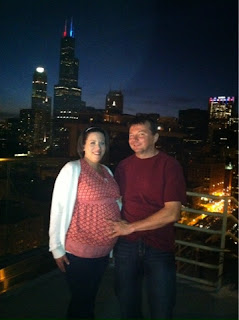 Over the weekend we were in Grosse Pointe, Michigan for the first of Nightingale's baby showers.   Whenever we drive up here I inevitable think about all the times I drove out to Kirksville for college and even to visit afterwards.  I don't know how I managed that 7 hour drive, most of the time on my own.
Nowadays I don't like to drive more than a couple of hours at a time, probably because I now commute 90 minutes a day four times a week for work.
Alas for this trip I had to do all the driving because Nightingale cannot drive comfortably in her condition.   The good news is that we left just after rush hour, made good time and only needed to stop once for a bathroom break, once for lunch and gas.
It was a nice trip overall and that is probably because after all these years of traveling to either Nashville or Michigan, we have finally reached our family equilibrium, the point at which a family becomes so use to each other and each others' subtle nuisances that we learn when to engage and when to leave one another the hell alone.
Nightingale is big on getting together with her entire family and they make a big effort to do it even though everyone now lives in different states.  I recall the first time we went to Tennessee to stay with Nightingale's folks, probably Christmas 2009.  The Adamas, who only had Little_Monkey#1 at the time, were also coming.  The future in-laws only had three rooms in their townhouse and the expectation of Adama was that he and his wife got one room, his 2 year old son would get the other because he was such a problem sleeper that he needed total darkness and silence and the parents would get the other room.  Leaving Nightingale, myself and her younger sister in the hallway on pull-away beds.

I was NOT going to sleep in the hallway so that a 2 yr old could have his own room and said that I could either stay in Chicago and give Nightingale a lift to the airport or the Adamas could suck it up for two nights and cram into a room.  My reasoning followed the insane logic that just because Little_Monkey#1 was a bad sleeper 18 moths ago when you tried it, perhaps possibly something has changed and you know, why not try it again?  Adama wasn't trying to be a dick to the other adults so much as he was thinking about his son and also assuming that we all wanted what was best for the little monkey and would all benefit from him getting a good night sleep.  And also being a dick. 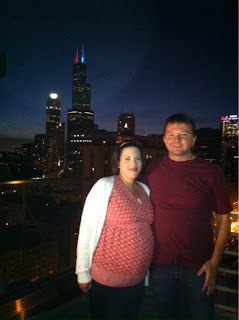 I had already taken the Adamas free baby sitter away from them when I started dating Nightingale and this was yet another silent battle in many to come over Adama Needs not trumping other family members.  This one was solved by someone -- MIL I believe -- getting us a hotel room off her rewards points.  It would turn out that Little_Monkey#1 sleeping issues stemmed from being hungry and though he still prefers to sleep in a dark room (who doesn't) he actually thinks its kinda cool to get to sleep in his parents room.

This trip is special because it is not only Nightingale's baby shower, but also Little_Monkey#2 baptism.  This brings lots of Nightingale's side of the family to the Adama compound including youngest SIL and future. BIL.  Just just say it is a crowded house but we are not on top of each other because it is such a big house and that Family equilibrium thing.  That doesn't mean there still wasn't a little bit of controlled chaos.

Future BIL is lobbying to get us to take SIL cats since they are moving in together into a smaller abode. I should be a good guy and take him up on it since Future BIL has taken a lot of pressure off me because he's more FIL's type of guy when it comes to social political issues.  On the other hand, if we get more cats I want to raise them from kittens.  Furthermore when poor Austin passes, I think it would make sense to have a short period of cat free time, no more than a decade of course.
Posted by Icarus at 11:48 PM