Back in the fold

Looks like I need a few more aliases for friends: A quick search on this blog shows I haven't written anything about a group of friends I use to hang out with a lot in the early 2000s.  I actually knew these people in high school as I was classmates with Ross and met his sister Monica and her friend Katness way back when, though we lost touch during college years.  In 2002 we ran into each other at Movies in the Park and I think we did like we always do whenever we ran into each other over the years since high school: exchange business cards, promise to keep in touch and then forget about it.

However, this time his sister stepped in and emailed me a day or two later.  We got together for a catch up dinner and Monica invited me to join them for their weekly MSTV night -- when they would take turns hosting dinner and watching the NBC lineup of Friends, Will & Grace and ER.  This is the group that K of KandJ is part of.  Katness went to high school with Monica.I should add that I'm sort of the Ted McGinley of the group as I came along well after this tradition was established, though somehow I moved into the primary core of the group.

In the years that have followed a strange thing has happened.  At first Monica and I were good friends, emailing every day and getting together whenever we could, picking up our friendship were it had left off from our high school days.  Ross and I were never tight in high school, but we got along and hung out in the same groups from time to time.  Monica's friend Katness however didn't seem very friendly.  I don't know if I was simply a useless male or if I had offended her somehow back in the day and she was still holding a grudge.

However, something changed somehow because over the years, Monica and I have grown apart while Katness and I have become better friends.  Not the interested in every aspect of each others lives friends the way Monica and I were, but I was invited to her wedding and she does take a spectators interest in my love life.

Anyway, while we've been couple dating KandJ, we have fallen out of sorts with Monica and one of the less frequent members of the MSTV crowd.  On Saturday that changed. 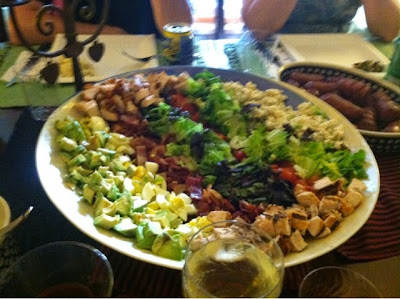 We were invited back into the larger MSTV gang.  With weddings there is always someone you wish you had invited and didn't and someone you invited and wish you hadn't.  Ours was no exception and when we got married, we couldn't invite everyone and one couple from the extended branch of the MSTV gang didn't make the cut.  So for the last three years on the few occasions where we did see them there was a slight understandable cold shoulder.

At the same time we also didn't see much of Ross or Monica either.  They actually opted to skip our wedding for a family reunion in Canada on the same day.   And I wouldn't have minded so much if Monica had told me when we were at Ravina two months prior.

Any way since we, like KandJ are having twins and Basia and her husband also had twins a few years ago, we are now in the Parents-of-Twins club.  I don't really we are going to be hanging out as much as we did in the pre-married days.  But it is nice that fences are being mended and doors opened so that it is easier on everyone to have the entire crew over.
Posted by Icarus at 9:28 AM

Email ThisBlogThis!Share to TwitterShare to FacebookShare to Pinterest
Labels: MSTV-friends