The Twins have arrived

Note:  I jotted some notes while we were off to the hospital last week and this is an expansion of those.  I often wonder just how much information to share here.  For this post I'll probably over-share because weeks, months and even years from now, it will be useful to us.  To my readers, perhaps not-so-much.

Two weeks ago today  Nightingale and I went to Baby Factory Prentice for our C-section.  The C-section was moved up a week because Boris had an issue with his kidney that was borderline.  We probably could have waited the week and the extra time would have benefited Natasha but it is what it is.

Based on the notes I jotted down, we apparently left our house with only a few ounces of gas in Nightingale car.  We did have time to stop but didn't, which meant that I had to fill the tank during one of the short trips home.

The were having trouble getting a blood draw.  Which can be a bit annoying when you are a former ER nurse like my wife.   She was very patient with them though.

Every time a new person comes in we have to do the "what are you having?  Do you know if it's boys? girls? one of each" dance.  After the third person I'm thinking I might put a sign up. 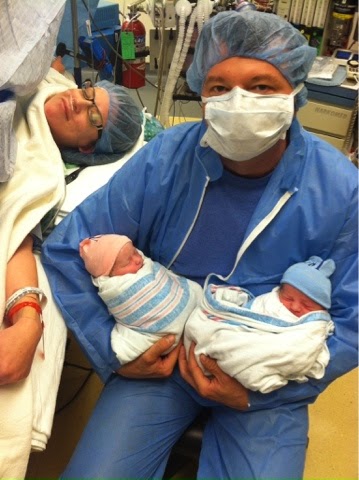 After the babies were delivered, and cleaned up and presented to us, and we made it back to our room, the next three days were really just one long day as far as I can remember.

In the span of one hour, we had visits from the lactate consultant, the pediatrician and the hearing test technician.  Compare that to the local hospital we dumped my mom off at last month.  It would have taken two days for those three to show up and do anything.

Natasha passed her hearing screening but Boris did not.  This is not something to be overly concerned with, especially with preemies which they technically are.

As I said, it seemed like we were rarely alone, especially during the daytime.  Then mid afternoon Wednesday Ii noticed that it was quiet and the time between nurse visits was increased.

We got released from the hospital on Thursday and it couldn't come soon enough.  The futon I got to sleep -- if you can call it that -- on was comfortable enough but the blankets I was  given were a bit scratchy. If I had to do this all over, I'd insist that on the last night I go home and spend quality time with our cat (whose world has been rocked since we brought Moose and Squirrel) home and pick everyone up the next day.

My company gives us two weeks for paternity leave.  We have one year to use them and the only other requirement is they have to be used in one week increments.  Thus I took one week for the birth and to help out at the hospital and will use the other one on a Week-to-be-Named-Later.

Cutest Dad Moment so far:  I came home from work one evening last week and Nightingale said that Natasha has been grumpy all afternoon. She put her in my arms and she starts smiling and stopped fussing.
"She just wanted her daddy," Nightingale said.  I'm sure that was a bit overstated but still.
Posted by Icarus at 8:00 PM