I'm writing these entries as they happen and as I have time to jot things down but I may not publish until months from now (or ever). Note: This post was written a year or so ago, when the events were still fresh.  I waited for a while to post this because I didn’t want to risk my job hunting efforts or reveal any information about my former company.  The purpose of these posts aren't to bash my former employer but to share my experience.

So TopFive missed the 9/1 deadline but around the middle of Sept told us they were going to do it.  They outlined a timetable to tell us when thing would happen and it was kinda lame.  I didn't find out my end date until Nov 17th.

My original end date was given to me as January 4th but has now been extended to March 1.  Because they finally realized how hopelessly, hilariously ill prepared they are with the knowledge transitions.  So good news, I get a 8 more weeks of paychecks, bad news I get 8 more weeks of insanity. 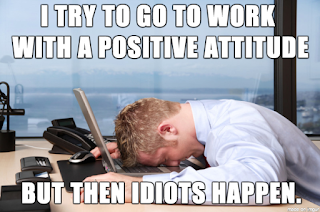 On the one hand extra paychecks are a good thing.  On the down side, I had already made my peace with Jan 4.  And while I didn't expect to have a job on Jan 5th, I figured it would be easier to interview and start a job sooner.  Now if I want to keep my severance pay -- a nice tidy sum that would be a shame to forfeit at this point -- I have to stay at TopFive until March 1.

However, my boss, being one of the Left Behind that will be re-badged, realized that the knowledge transitions were scheduled too tightly and the separation dates too soon.  This means that all the knowledge would walk out the door before it could be imparted on the people replacing us.

This association with TopFive has become a dysfunctional relationship without the angry sex. It's like a bad romance that should end but you hang out because you want to be sure to have someone to bang on NYE.

Meanwhile, when we thought my last day was 1/4/16, we decided to take our kids out of daycare to save some money.  Only after we made those arrangements did I get the news about the extension.  Since TopFive shuts down for the last two weeks of the year because of where the holidays fall on the calendar, this meant I only had to do one week of being a Stay At Home Day and Working From Home.  It was hell.

We probably could have gotten our spot back in daycare but saving the money is more paramount at the moment.  At the moment, I'm taking care of the kids with my mom's help.  She's the only resource we have in the Tri-State area and she comes with her own bag of crazy.
Posted by Icarus at 8:42 AM