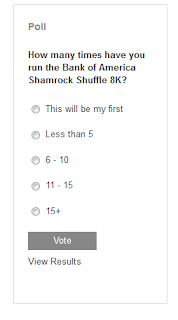 I took this survey on the Shamrock Shuffle site.  The poll doesn't show how many people took it but I don't expect the number was very high this early, since the race is the better part of two weeks away.

So let's assume that an even hundred took it thus far.  Using standard rounding rules, that means almost half the participants (45 people) are running the Shuffle for the first time.  Another 38 people are running their 2nd, 3rd, 4th or even 5th time, which implies that they aren't sick of it yet.  After 5 times however, repeat participants drop sharply.


This might lead one to think that 5 times is enough for most people.  It also could mean that by the 5th time running this, you really don't need to go to the website to figure anything out since it is pretty much the same each year and you are also bombarded with emails explaining any new things.

only 2 people continue to run this after 10 and 15 times respectively.  But that isn't true because my friends and i have run it for the last two decades and according to FB I have more than 2 friends (even when you factor out imaginary ones).

The simplest answer of course is that most people don't take silly polls like this one unless they are incentivized somehow to do so.

I've run the Shamrock every year since 1996 except for 2007 which was one of the worst years of my life.  I'm sure it's just a coincidence but I've superstitiously made it a point to make the Shuffle the one race I do each year now that my running has diminished.

Nightingale promises that if we do move to Tennessee, we will come up each year to run that race for as long as I like.