Our weekend was rather chill in spite of the obligatory trip to the remote ends of Chicagoland for a family birthday party.  The reason was because my mom went home Friday morning and stayed there all weekend.  When she is around, she is an extra set of hands to help with the kids.  but it comes at a price. When shes' not around, its more physical work for us, but the atmosphere is more relaxed.

Saturday AM, Nightingale went to Costco while I kept the kids...alive.  She got home, we had a late lunch and then headed out for the birthday party.  My cousin Wednesday has two kids, 2.5 years apart, the youngest being just a few months older than Moose and Squirrel.  Wednesday is going through the birthday learning curve between having combined Bday parties, one for each, and also learning that not everyone wants to give up their Memorial Day weekend to go to a kids party. 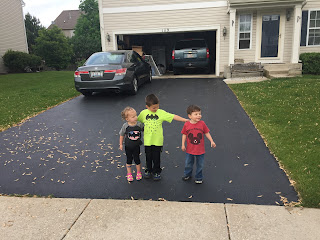 I've always said that the best time to throw a kids party is when it's a good time for you.  Kids don't learn how calendars work until much later in life so take advantage of it as long as you can.  As long as you give them cake, ice cream and presents they really don't care if you do it 2 weeks after their real birthday.

The party was nice but we overstayed.  the plan was to leave during the 5 o clock hour and we stayed until almost 7.  The meant that we were due for a meltdown on the way home because the kids were getting hangry.  Luckily we got to the McDonald's on the highway Oasis before full meltdown occurred.

Sunday was nice weather in the am but cooler and rainy in the pm so the kids couldn't go outside and burn energy.

there are two projects I want to get to ASAP but I won't be able to touch them until this weekend.    This week is a conference for my job which involves seeing a lot of the people from the No-Name Software Company.  I' m a little anxious about that.

There was one thing that occurred over the weekend, which I will write about in detail later.  In the past, things like this usually leave me with an ominous pit in my stomach.  To be sure, there was a bit of a dark cloud hoovering around.  But I also have enough confidence in myself to know that this is not of my doing and I don't deserve the bullshit this person is sending my way.