Our house comes with a small room off the attached garage.  I'm told, by Mark the Handyman, that this isn't a common feature down here but who knows.  My inlaws used it for extra storage and it also houses one of the water boilers.  I decided to convert it into a more usable workroom.  A place I can go when I need to assemble a small toy, change batteries, or whatever. 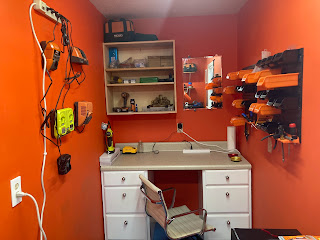 Edit from the future:  I found some pictures of the workroom in its previous form so I redid this post.

In my perfect world, I would have completely emptied the room, painted it, and then moved stuff back in.  It's not a perfect world.  I had to paint around stuff that had no place to go.  Other projects had priority, some unexpected things came up and the weather is a factor as well. 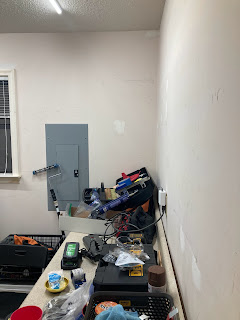 While it doesn't get Chicago Freezing down here, it does get cold in the winter that hanging out in there isn't pleasant.  And in the summer the opposite is true. 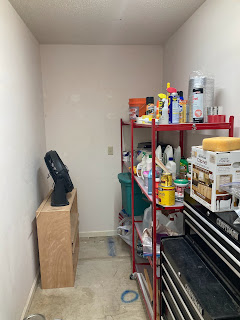 But I've finally reached a point where it is now operational.  My inlaws had the makeshift desk on the North wall.  I originally positioned it against the West wall.  But then I decided that if I cut it, it can fit against the South wall and take up less space.  As they say on those House Renovation shows, It truly opened up the space! 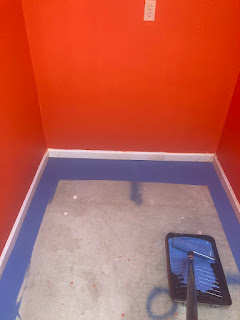 I also realized that I can use the wall to mount all my battery chargers which also frees us space.  the inlaws left behind this mirror which I really don't have a use for, so I'm going to mount it next to the cabinet they also left behind (which I paid Mark the Handyman to install for me). 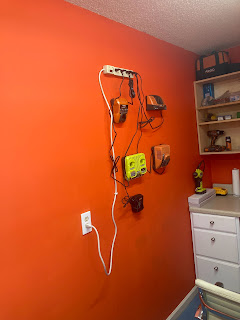 The last thing I may do to this room is run the internet through it.  I have an old VPN switch that should be able to do the job and then I can run CAT6 wiring to each of the bedrooms in case we ever need a hardware connection.