This one's for Groove 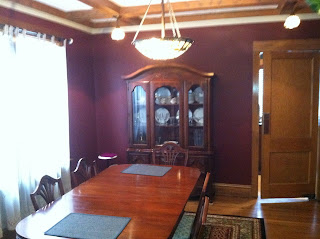 This post is mostly to see if the Blogger app for the iPad works as expected. The problem I was having was I couldn't get the text to scroll down in the Blogger web interface on safari on my iPad which made editing difficult. This app seems to solve that problem, though rather clumsily -- I have to exit keyboard mode and edit mode to scroll down.  The app lets me type some text and upload photos. Beyond that it's just slightly better than using the blogger web interface on any iOS device.

So onto the photos of our dining room so that Groove77 from Crib Chatter can see red!  He hates dining rooms that are red because that was the trend a few years ago and he feels it's been done to death.  While I'm inclined to agree, I don't feel as strong about it as the Groovester.  The color we choose works for us and we had to make a relatively quick decision if we wanted to get the place painted in a timely fashion.  Had we a little more time we might have picked a different color that didn't Camouflage our furniture because it is cherry red. 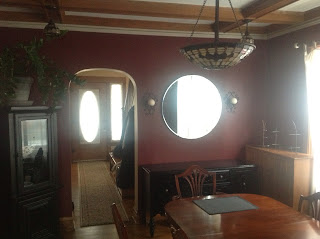 It's interesting that we took the colors that the previous owner had and shifted them one room.  Originally the hallway was dark red, the dining room some shade of green and the living room was some shade of yellow.  keep in mind that I'm speaking from the male perspective with less of those cone things in my eyes that females of our species have that allow them to distinctly distinguish and identify all the different shades between White, Bone and Ebony.

We opted to paint the kitchen as well even though we didn't mind the color because we figured we might as well make the place ours.  In the bedrooms we used two shades of blue in the master and one shade of each in each spare bedroom.  We also got the ceilings painted because a friend pointed out that it would be give it a fresh look. 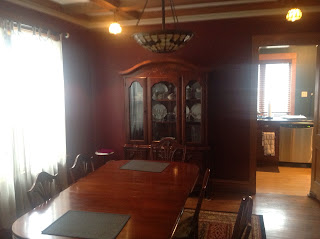 As we didn't know what we were going to do with the basement or attic, we opted not to paint those.  We can farm that out at a latter time or do it ourselves.
We made the decision to have the house painted before we officially moved in because the best time to paint the house is when it is empty.  Okay it wasn't completely empty as we did start bringing small items over and ordered a new King size bed to replace the queen we were sleeping on.

We still need to get a headboard for it, but as I've just dropped a publicly undisclosed but emphatically non-trivial amount of money on home upgrades and renovations, and this month we shell out an additional undisclosed but emphatically non-trivial amount on taxes, I’ll be happy not to spend any money I don’t have to for a while, thank you very much.

I mention the bed because it was really the only piece of furniture and the painters did not put it back the way they found it. They also got some paint on a doorknob and our on of the doors of our kitchen island cabinet. Add to the fact that they didn't remove light switches and tried to paint around them until nightingale noticed and removed them for the lazy bastards and lets just say they won't get the bid for the basement and attic.
Posted by Icarus at 2:49 PM