Just another half baked theory

Have you ever met someone and they remind you of someone you use to know five, ten years ago in another time and place in your life?  You met someone at the office and they remind you of the person you had in your spring English Literature class.  Or someone from running club reminds you of the person you worked with one summer at the telemarketing agency.

In the Battlestar Galactica (BSG) world there are 12 Cylon models:

The humanoid Cylon is the quintessential form.[4] They quietly and effectively infiltrated the Colonial defense forces, with humanoid models such as Caprica-Six gaining access to secret military technology, and sleeper agents such as Sharon "Boomer" Valerii being planted within the Colonial Fleet itself. Only slight chemical and physiological differences reveal human from Cylon. One of their greatest advantages is the ability to "download" into identical bodies if killed, allowing them to haunt the Colonials in ways never before imagined.
-- Source    (http://en.battlestarwiki.org/wiki/Cylon_Models )


What if people could be lumped into 10, 12 or some finite number of model buckets?  Over the years I've met people who remind me of other people to the point where I can almost predict what they will say or do next. 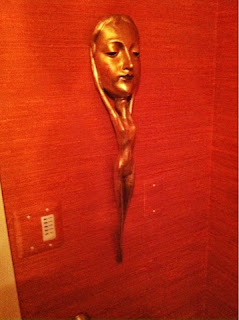 Maybe the reason we keep running into these same models...or perceive them as the same model is because our subconscious has learned something from the previous encounter and this is a chance to get right whatever got screwed up or wasn't realized the first time.

So maybe Nannette in Contracts reminds you of Jessica from your first post-college job at the accounting firm.  They are two different people but there are some striking similarities.  You remember that Jessica could be a bit of a two face.  She would laugh at your off color jokes and smile at your dark humor but then she would mention it to your supervisor.

In my real world example, we have a guy at  TopFive that reminds me a lot of Director Palpatine of the No-Name Software Company -- shiny on the outside, empty and hollow on the inside.
Posted by Icarus at 11:00 AM