So far it has been a relatively mild winter here in Chicagoland and apparently throughout much of the Midwest.  We had essentially had a snow-free December and what little snow did come early January is now mostly gone.  There are still 50+ days left of winter and beyond that mother nature has her own calendar.

That said, it is a better winter to train for a spring race than some of the ones I've trained in before.

If you are planning to run a spring marathon, you have to do a lion share of your mileage during the winter months. Training for a marathon during the Winter is rough enough under ordinary circumstances.  It's dark when you wake up, dark when you get home from work and cold all throughout. If there is snow that toggles the difficulty setting up a notch.


So I've signed up for the March Madness Half Marathon in exotic Cary, Il.  This HM is special because it is a tough hilly course and hills are hard to come by in Illinois.  Rumor has it they actually reversed the course a few years ago because it was too tough.  I haven't found any concrete evidence of that.

Locals who are signed up to run Boston usually run it, even if they have to bandit, because usually aligns perfectly with the Boston Marathon training schedule. What that means is your 12-14 mile "cutback" run usually falls on the same weekend as the MM HM so why not.

Because of my diminished speed and endurance, along with having 4 month old twins to wrangle, I opted to use Runner's World Smart Coach to create a training program. 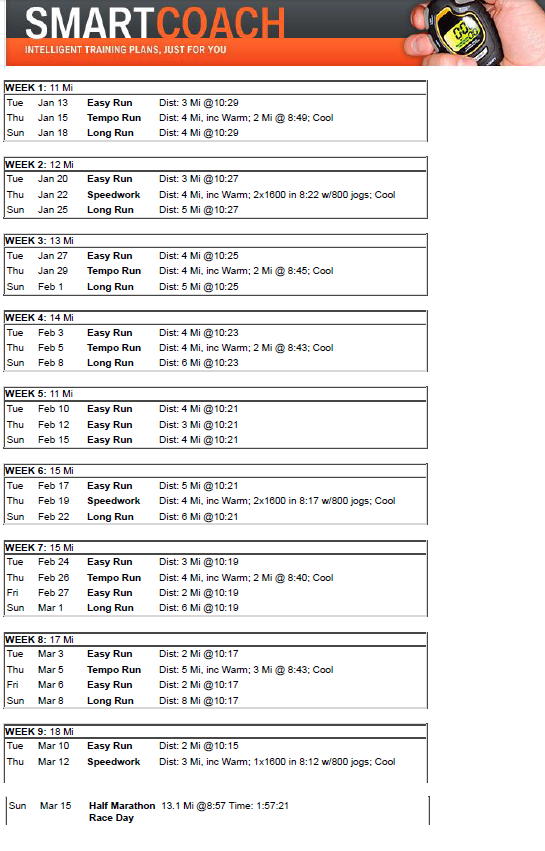