This weekend, like many weekends, we didn't get nearly as much accomplished as we would have liked.  The major difference was this was more or less on purpose. Saturday morning came, it was a beautiful day and we didn't do much except veg -- at least as much as two adults could veg when you have two 9 month old energizer bunny rabbits crawling around your floors.  We even had my mother over most of the day Saturday.

So while we did squandered an opportunity to get some yard work done and make meals for the week and barely got the necessary grocery shopping in, I'd like to think that this All-Stop that our bodies made us do was a necessary re-charge for what is to come.  It's going to be a busy rest of summer and there are some things coming up down the road that I cannot talk about now but am secretly writing up and will publish once I can.

Our cat Austin is not in the best of health.  The guy is 15 years old and finally showing it.  For the last year or so, he's been peeing outside of his litter box and more recently crapping in and out of it as well.  Now he is limping and not eating.  I fear his days are numbered if we don't invest the money to keep him on kitty life support.

A few weeks ago I hired a crew to do some work around the house.  Specifically, power wash the house, back deck, driveway and garage.  I also wanted to get my windows washed including the tracks.  And I needed my gutters cleaned.   I wanted one crew/vendor to handle all of this even though I knew it would be a big expense. 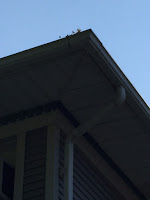 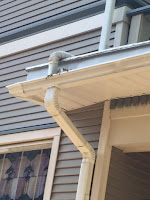 I called VENDOR they gave me what sounded like a fantastic price quote and I scheduled the service and then scheduled my plans around that appointment.  Unfortunately it didn't quite work out the way I had hoped.

First, the work crew showed up 3 hours early!  This is not good.  I was at a doctors appointment that I specifically scheduled based on the start time of crew.  Nightingale had to wait until I got home before she could drop our kids off at daycare -- this is a major inconvenience because she had things she needed to do.

Next, the crew didn't know about the gutters or the garage.  I called to ask and whomever answered the phone (the owner I believe) said they would contact the guy in charge of the crew and circle back.  They never called back until I wrote an unfavorable review on Yelp.  I asked the crew leader to do my gutters and I'd even pay his quoted $180 for that, but he didn't have the right sized ladder.  He promised to come back the following week, but didn't.  He also told me that he would have charged me a lot less for the power washing & window cleaning.
This is just one of many examples of me paying someone to do something I ask and yet still not getting exactly what I paid for.  BTW: the crew did come back and clean the gutters on the house -- a day later than the owner said they would and naturally I was not home to supervise.  The crew lead called me and asked what he was supposed to do.  I told him clean gutters and power wash the garage.  He repeated "Power Wash the Garage" like I had instead said "Give me your sister's kidney" so I said "just handle the gutters" and called it a day.