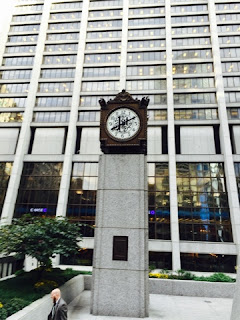 Last week I had the chance to be downtown as my  boss sent the team to a vendor workshop.  The tool wasn't part of my skill set or something I would know how to use effectively, but it was still a nice learning experience.

Nightingale and I dropped the kids off at daycare and then drove into downtown together, like we use to do when I worked one day a week at TopFive's downtown office.  Since I had tons of time, I opted to walk and burn off some calories, knowing I would replenish them later at lunch with former co-worker.

Got to the south end of the Loop in less than 15 minutes as indicated by the time on this clock.