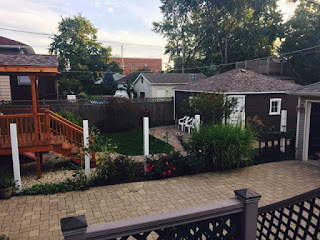 Ever since we moving into this house, one of the first things that was apparent was that our
neighbor's fence was going to fall over sooner or later.  At first we were not sure if it was his fence or our fence because that would have required a conversation asking a direct question and that's not how we roll around here.

Seriously, I did get a chance to ask our neighbor once and he confirmed that it was his fence.  He also alluded to some issues with the fence installation, our driveway installation and a previous owner of our house (not sure if it was the guy we bought from or another asshole) who was responsible for all of that.  So we quickly changed the subject and did the time honored neighborly move of avoiding each other whenever possible. 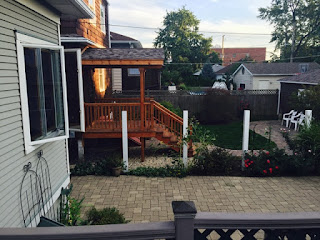 However, the fence continued to get worse and worse.  Our expert analysis, which consists of looking at the fence posts, determined that they had disconnected from the part under the ground.  Nightingale was reluctant to invest in much gardening on that side of the yard because she worried the fence would topple over sometime this summer and when they replaced it, a crew would trample her flower bed to do so.

Nightingale wondered why they didn't repair it last year when they did their back gate and landscaping, to which I said: money.  Why spend money you don't have on a fence until you absolutely have to.

Well lo and behold, the other week I was in my backyard with the children and our neighbor told me that the fence people were coming the next day to fix the fence.  I don't recall the timeline but I think they removed the old fence and dug the posts on a Thursday and finished up a week later with the new PVC fence.  It looks pretty good, so much so that Nightingale wants us to get one for the other side...once we can afford it. 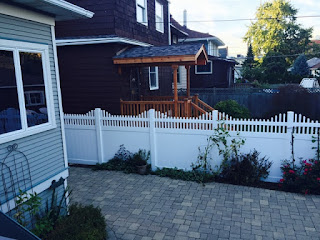 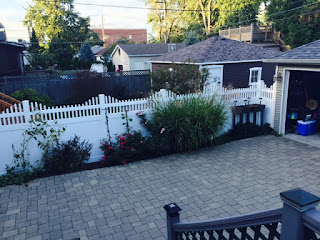