Some forward progress but not where we want to be

I got a few things done over the weekend, including a plaster repair project that had been outstanding
for a long time.  So next weekend I get to paint. I tried to do the basement access thing but botched it.  It isn't a project one can really do during nap time.  So maybe when the weather gets better in the spring.

Speaking of which, we had a rare 70 degree Sunday in October.  Our weekends are generally sleeping as late as our kids will let us, then doing something with them so they get worn out enough to take a long nap.  Then when they awake, we try to wear them out again so they go to bed and either sleep through the night in their own bed or at least give us a good head start to Slumberland.

We went to the last Farmer's Market at Jefferson Park on Sunday.  Our thing is to get some crepes and then let the kids play on the playground.  It's not really relaxing for us though because we still have to watch that the kids don't get hurt and play nicely with other kids. 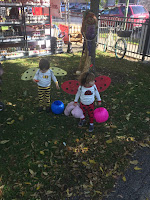 On Friday Nightingale officially sold her south loop condo.  It was a long, arduous journey if you count last year's efforts.  We put it on the market early August and it went under contract within a week.  Everything seemed to go along fine until two weeks before the closing.  I'm not gonna go into the painful details but essentially it fell out of contract and we had to put it back on the market.

Luckily, a cash buyer showed up and it went back under contract quickly.  Because it was a cash buyer we could close quickly which helped but we still got stuck with an extra month of mortgage.  Then a week before closing another issue came up, we resolved it but it was a costly solution.

I hate lawyers. I hate realtors and I hate the Fucking Mortgage industry.  If any kind of apocalypse crops up, I really hope those three groups don't survive.

But at least it is off the books and we will hopefully stop being screwed at tax time.


For grins and giggles, I paid off my car a few months early.  While I had been making larger than required payments from day one (I usually round up to a whole number) there was never any immediate need to pay it off faster than the 60-month terms because my interest rate was something like 2.7%.  Even when my job went away earlier this year and my income stopped flowing, I was so far ahead that I didn't have to make a payment for two months if I didn't want.

We are looking into paying off Nightingale car next.  We didn't get enough back (and certainly didn't make any money) to pay it off in one shot but we can make a big enough dent that we would be within striking range of paying it off in a short amount of time.