The Secret in the Chicago Pedway

The Chicago Pedway is a network of tunnels, concourses and bridges connecting buildings, retail shops, hotels and train stations throughout downtown Chicago.  It is also a labyrinth of magical mystery for those who know The Secret.

My coworkers and I usually walked the Pedway together on our way to our respective trains.  Often we would stop at M-Bar for "Bites and Beers" as their hook went.  This particular Thursday on a nothing special week in August led us someplace new.

"M-Bar is too crowded, we'll never find seats," Jessica said.
"We could go to Inn Keepers," I suggested.
"That's too far and besides, the Wi-Fi down there sucks," Steve said.

“I don’t think we have a choice,” I said, indicating the lack of available seats.  “Besides, just once it would be nice if I had the shortest walk to my train”

Inn Keepers was closest to my train, the Blue Line on the CTA and Jessica took the Red line. We usually went to M Bar because Steve didn't want to double back to his South Shore train.

"Fine, if we don't find something else on the way." Steve conceded.

We started walking through the Pedway, through the tunnels that we have taken hundreds of times. We weren't really paying attention because we could walk these in our sleep when we saw a bar we had never noticed before.  There was nothing fancy about the entrance, though the doors were open and a blackboard listing the drink specials invited us in.

Unlike Steve, I walked passed this corridor every day to and from work and I never set eyes on this place before.  As we walked in, I noticed that the name of the establishment was called The Secret.  It looked like a timeless old man bar with some modern upgrades. For instance it had a digital jukebox which at the moment was playing Fall Out Boy's My Songs Know What You Did in the Dark

We bellied up to the bar and found three empty stools, not too far from the door.  The bar looked much larger inside than it appeared from outside.  It was probably some type of optical illusion but it just seemed to be impossible that a place this size could fit inside the part of the Pedway it had to be located in based on my memory of the streets above.  But that would turn out to not be the strangest thing about this place. 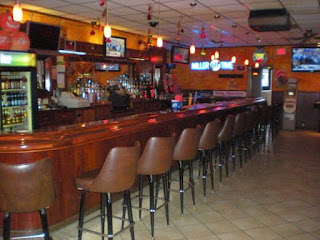 The bar tender approached us.  She asked what we wanted and we asked for our usual:  a domestic beer for Steve, a Moscow Mule for Jessica and a craft beer for me. We talked about the usual stuff: work related things, office politics, gossip, and of course the current status of certain Chicago professional sports teams.

"This round is on the house," the bartender said placing our order in front of us.  "for our new customers."

As usual, I was sitting between Jessica and Steve, which meant I was limited to talking to the bartender while they engaged people on either side of us. Another round of drinks arrived.  I introduced myself to her and she said her name was Katrina.  She had dark hair, brown eyes and looked to be at the younger end of twenty-something.  She went to deal with a customer at the end of the bar when Steve turned to me and said, "she's very attractive for a lady her age."

This was an odd statement.  "Geez Steve, any younger and you'd be a pedophilia.  "

"Are we talking about the same bartender?" he asked, laughing it off.
"As far as I know there's only one here."

"This round is on Joe, " Katrina interrupted with a knowing smile.    "He is celebrating the White Sox successful season."  I wondered which season since they were not doing so well this year.

"That bartender is smoking hot," Jessica said, derailing my train of thought.  If it hadn't been for Steve's previous comment, I wouldn't think much of a woman complimenting another woman, albeit so excessively.

"Getting in touch with your inner lesbo?" Steve said.

"Not since college, why do you ask?" Jessica replied.  I wasn't sure what was going on.  As far as I could tell, there was only one bartender working tonight.  I looked at Katrina again, she was at the far end of the bar.  From this angle she definitely looked like a 21 year old girl working at a bar.  However, her reflection in the mirror looked a little different.  It might have been the angle and the lighting but for a second, she did look different; while still very comely, her reflection was much older!

Before I could point this out to either Steve or Jess, another round was free because of the Cubs won that day.  Then another round because of The Blackhawks.  Did they not hear about Patrick Kane? Round after round, on the house or on some patron happy about some local team's success that didn't quite match the current sports landscape I read about daily on my iPhone. 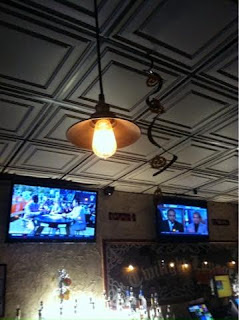 I got up off my seat and decided to thank "Joe' for the drinks.  He was talking to Al, who had just bought the last round.  Great, two birds with one stone.   I thanked them for their generosity and asked if I could return the favor.

"Sure thing, you can buy me a drink when the Bulls three-peat!" Al said.

"That might be a long time, " I said.  "They need to actually win a few more playoff games".

"I know the Jazz are a tough team to beat but Jordan can do it," Al said.  "excuse me, I need to go to the bathroom."

I wasn't the biggest basketball fan, but I recall the 2nd Three-Peat of the Michael Jordan Era and it occurred to me that Joe must be still living in 1998.

"Wow he must really love the old school Bulls," I said to Joe.

"Tell me about it, " Joe said.  "Now I'm a White Sox fan and I just know after that battle with the Angels, we are gonna win the World Series."

While I knew a lot of liquor was flowing, beer hadn't the ability to make me drunk since college.  So unless Katrina spiked my drink, something wasn't right at The Secret.   I excused myself from Joe and walked back to Jessica, who was still making eye at our bar tender.

"Do you notice anything weird about this place?" I asked.

"Yeah, I'm wearing my best boob shirt and the bartender hasn't noticed me," Jessica said with disappointment.    I take yet another look at Katrina.  On the surface I see a young lady with long dark hair and brown eyes.  But her reflection in the mirror is a muscular dude with blonde hair.  His bone structure was fine and perfectly symmetrical.

I think I was beginning to figure out the secret of The Secret.

I tried to leave but was moving very slowly, as if in slow motion.  The double doors of the entrance started to close.  I don't know how, but I just knew that if I didn't get out before the doors shut, I never would.  Somehow I managed to get to the doors.  The doors suddenly seemed much further away than when we first walked in.

The left one had already closed.  I placed my hand on it, and it wouldn't budge.  The right was closing too and I pushed with all my might just barely stopping it.  I scooched myself thorough and took off.  There was no one in the Pedway.  I started to run.   I didn't know what direction I was going and I tried to get my barrings while not slowing down, which caused me to misjudge a step.  Suddenly I found myself on the floor.  A passerby asked me if I needed help.  I asked where I was and what had happened.

"You took a spill on that step," a random stranger said.  Another person muttered: "you'll be fine, I gotta catch the 6:15"

6:15?  There was no way it was 6:15, because we entered The Secret around 5:45 and we easily spent more than half an hour there.  I decided to double back and check on my friends.

I came across the place I was sure the bar had been.  Only a solid brick wall was in its place.  I went home and slept very restlessly.  The next morning when I got to work, there were questions about Jessica and Steve's whereabouts.  What could I say?  Who would believe me?

I have walked every inch of the Pedway since that night.  Even going in the opposite direction and exploring other tunnels and walkways.   I've never found The Secret again. 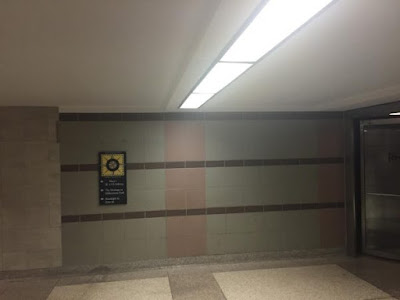 The above story was originally posted on Listing Toward Halloween on October 7, 2016.
Posted by Icarus at 8:49 AM