Weddings ceremony not as expensive as you think

First, there is hype for something. Then, there's pushback to the hype, in which the thing that got excessively built up gets torn down. Then, there's anti-anti, in which people tired of both the hyping and the tearing-down gather to talk about something else.

Today the overblown/over-blown-away institution is Valentine's Day, but weddings are actually the classic case. They get totally out of control, yes ... but then the "I got married in a burlap sack and served canned beans and it was the best wedding ever" gets out of control, too.


Distance Drea and I were discussing wedding planning the other day.  She's engaged and has been picking my brain about all things wedding related.  I'm trying to be helpful without making her wedding a do-over for ours.  Things will go not-according-to-plan, that's part of weddings like cake and drunk relatives.  Most people wouldn't have it any other way.

Many weddings come with some type of ceremony involving a religious institution.  We made the decision to have a catholic ceremony at a catholic church.  As soon as we committed to that, it seemed like we kept running into that couple that did the "burlap sack and canned beans" thing and held their ceremony in the subway.

The cost of the church, the pre-cana and the tips for the priest and the organist came to about 2% of the total cost of the wedding. To put that in perspective, let’s say we argued and begged and pleaded and wheeled and dealed and got the church et al to go halves…we would have only save $200. Nothing to sneeze at but nothing to get worked up about either.

Yet people complain about the cost of the church more than anything else. They won't blink at spending an extra two grand on chair covers or an extra $500 on full length tablecloths.

Back in the day when I church hopped, I probably could have had my pick of parishes. Or not.  Each one has its own unique rules for who can get married and when.  I suppose I could be wrong about this, but as far as I know, at least one party has to be Catholic.  While they would prefer both people be catholic (and opposite gender, they insist on that one), I don't know of any church that outright refuses to perform a catholic ceremony as long as one party is a catholic in good standing. 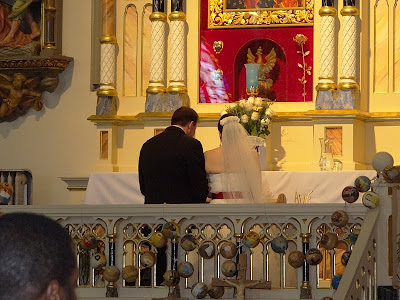 Usually they want you to be a member in good standing for at least a year, which loosely translated means don't sign up a Sunday in May, and come in the following Tuesday asking if the church is available the first Saturday in June.  They'd like you to be a member for at least a year before you book your wedding and then you still have to fit on their calendar which can be filled up a good year in advance, especially churches that don't perform weddings during Advent or Lent.

In 2008, before engagements and weddings were even in the picture, I had the good sense to become a member of the church I was confirmed at, St Vincent de Paul.  Nightingale and I got engaged on Halloween 2010, and when I contacted St Vincent, the first opening they had was late November of 2011 (I don't recall if they had anything earlier because we knew we'd need at least a year to plan and save money).

In the end went with Polska Misja Duszpasterska w Chicago aka Holy Trinity Polish Mission.  Besides being available and open to non member catholics, it is conveniently located near the expressway and has a huge parking lot -- two things St Vincent's lacks.  It was also important to me to pay homage to my Polish roots because if Poles like me don't, places like Holy Trinity aren't gonna be around.
Posted by Icarus at 5:00 AM